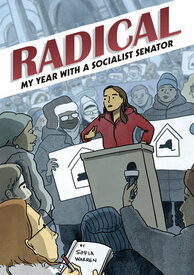 Here's an invigorating examination of the nuts and bolts of government along with an inside story of various operating systems that inform it.  While these details of the functioning of our government here in the USA are vitally important, they are nonetheless unfortunately often of the variety that have the tendency to put readers to sleep.  Sofia Warren overcomes this obstacle  with her decisions to: 1) embed herself within the office of a state senator, becoming not only a fly on the wall and observing all the goings on, but befriending the senator and her staff in the process; 2) employ the memoir format to report her findings, thus giving readers an exciting, "you are there" experience; and 3) her choice of 27 year-old socialist, Julia Salazar who was elected (as a member of the Democratic Party, we should point out) in 2018 to represent New York's 18th State Senate District, which includes the Brooklyn neighborhoods of Bushwick, Cypress Hills, Greenpoint along with parts of Bedford-Stuyvesant, Brownsville and East New York.

Radical includes details of Warren's own life along with her own musings and doubts about everything she is experiencing, making for an engaging narrative and keeping tedium at bay.  Her artwork, in black and white with grey tones, is clear and concise, effectively providing the visual context for the information, and working well to maintain the focus over the 300+ pages of her journey of political discovery – ultimately transforming that journey into the reader's own.

No less an authority of political cartooning than Garry Trudeau has this to say about it:  "What kind of politico embeds a cartoonist in her office for a year? Well, a remarkably savvy one, it turns out, and the payoff is Sofia Warren's beautifully-rendered account of a rookie's initiation into state politics: an exhilarating baptism of fire, and a sorely-needed love letter to the power of public service."