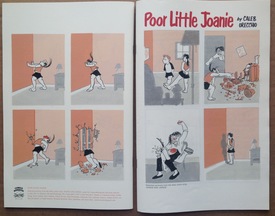 Here it is: POOR LITTLE JOANIE, the latest - and without doubt, the greatest - print collection of Joanie and Jordie strips by Caleb Orecchio, whose chops you can see developing and improving right before your eyes. The 56 one-page, four-panel strips start out in B & W and then progress through two different two-color palettes, each of which maintains its own particular approach. Action, humor, drama: it's all here. And while we don't doubt that most readers of this space have already seen many of these strips when they first appeared in/on Comics Workbook, we're here to tell you that you haven't truly experienced this work until you've read it in print - and this meaty saddle-stapled edition is the jam!

And, even though these were drawn over the border in Ohio, Caleb plays such an active role in the Pittsburgh-based Comics Workbook, we've given this book an honorary "Made-in-Pittsburgh" designation.

This item belongs to the categories: Made in Pittsburgh, Small Press Comics
You may also enjoy these related titles: