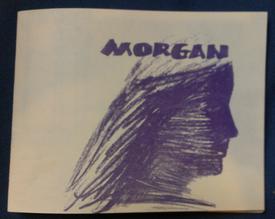 Out of the blue, it's an all new work by Frank Santoro!  Morgan is a nearly wordless, 32 page, horizontally formatted, 6.5" x 5" Risograph printed in royal purple.  Myth and symbol merge in a series of sensual images that link nature, sexuality and power within a framework that hinges on the inherently deceptive character of appearances. Once again, it's all about the spread.  The narrative of Morgan is biplanar in construction, grounded in two, alternating modes of perception – asserting any fixed view of "reality" (or history) as being unstable, illusory and based on self-deception, willful or otherwise – and challenges the reader to synthesize the story's latent content in the collision at the center:  to read each image first individually and then in tandem, the spread as a single unit; to incorporate the basic principle of Eisensteinian montage in simultaneously reading both images to identify a new, synthetic meaning that rises out of their combination.  The uniform sensuality of both the drawings and the images serves to formally adhere the layers, while momentum is built through parallel storytelling occurring on two planes of reality, primarily – but not solely – represented across the spread, and the climax occurs at their intersection.  All this in 32 highly compacted images.  Needless to say, you'll want to read this one through multiple times.  Anyone unfamiliar with the Arthurian legend and/or Morgan Le Fay's role – which has been, over the centuries, highly mutable and often debated – is hereby directed to delve a bit deeper into this foundational legend that is a primogenitor for much in Western myth, including a significant swath of that underpinning the heroic fantasy genre, aka superheroes.  Britannia.com's Morgan Le Fay page is one good place to start as it includes a bibliography of sources for further reading.  Santoro's Morgan has been produced in an edition of a mere 200 copies, so don't snooze on this one!

This item belongs to the categories: Gift Catalogue, Handmade, Made in Pittsburgh, Small Press Comics
You may also enjoy these related titles: