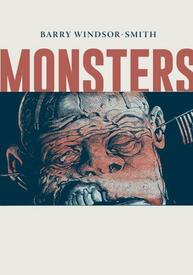 Over half a century after exploding onto the American comics scene with his work on X-Men, Daredevil, The Avengers, and culminating in his legendary run on Conan, the British comics artist Barry Smith (later Barry Windsor-Smith) is still at it, and has now, at last, delivered his magnum opus.  Monsters, is a (quite) long-in-the-works (as in over twenty years), 360 page tour de force largely set in the America of 1964.  Here in the pages of Monsters, Windsor-Smith revisits some of the themes he explored in Weapon X – with an undeniable nod to his (sadly, now deceased) artistic peer, Berni Wrightson’s own masterwork, Frankenstein – but here with a heightened degree of realism and greater attention to the details of family dynamics.  All together this makes for an ambitious work that connects the American family to American politics to American history in ways that reveal these connections to be truly monstrous, making for a read that is simultaneously highly engrossing and also quite disturbing; it is also, it must be said, crushingly depressing.  We hope Barry feels better after finally getting this out of his system!  Anyone interested in learning more about this ambitious work – and willing to risk a possible spoiler or two – is hereby directed to these reviews in The Guardian and The New York Times, among many others.

This item belongs to the categories: Graphic Novel
Search Copacetic
Just in:
See all recent arrivals...
Copacetica
Edifiying essays about all things Copacetic