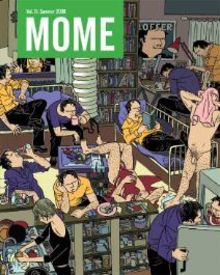 Speaking of "a whole new approach to comics," what better fits this description than MOME?  To any readers who might have felt a creeping worry that MOME wouldn't be able to keep it up, that there simply wasn't enough high calibre new work being produced to keep MOME floating on its lofty plane, let us be first to say that these fears can be laid to rest with this issue, which is arguably the best yet.  It starts off with a new Al Columbia piece that (finally) lives up to the promise of his outsized rep. "5:45 A.M." is a story which shows us that, yes, God is in the details.  In a mere eight, actionless panels -- more or less a tableaux nature morte --  Columbia manages to quite successfully share with us his own dark lord.  "Einmal Ist Keinmal" by this issue's cover artist, Killoffer, follows.  A variation on his singular masterwork, 676 Apparitions of Killoffer, "EIK" will give you plenty to ponder while you pore over its seductive linework.  Nate Neal is up next with "The 5 Simple Cosmic Do Dats" wherein he deftly manages the fairly astounding party trick of grafting his own left-leaning post-punk tendencies onto a synthetic hybridization of the aesthetics of Kim Deitch and the narrative techniqes of Dan Clowes to create that wonder of wonders:  an entertaining work that is both funny and smart.  You might find yourself scratching your head at first while working through this one, but keep going -- or better yet, start over and try again -- this one has more going on in it than first meets the eye.  Four panels of "Truth Bear" by Ray Fenwick (who doubles as this issue's [quite engaging] interview subject) follow.  Eleanor Davis serves up an irresisitable visual treat , "The 10,000 Rescues," and then we have seven pages of fun with the future of the wonderful world of Art in "The Galactic Funnels," courtesy Dash Shaw, before plunging into John Hankiewicz's personal gift to Copacetic -- a five-page story that combines his own totally unique approach to narrative with a brief episode in the life of the one and only Anita O'Day! (Thank you, John.)  Then it's Emile Bravo's turn to wow us with his four-page assembly of signs & meaning which deftly deconstructs the quandary of globalization, "A Question of Human Resources."  Newcomer, Conor O'Keefe brings a novel approach to his two pieces, combining an old-old-school Sunday page design sense (we suspect he may have spent some time curled up with Art Out of Time) with a very contemporary sensibility.  We look forward to watching his talent develop (and we hope that it continues to do so in the pages of MOME).  And then there's the topper:  "Million Year Boom," by Tom Kaczynski will knock your socks off.  It is probably the first wholly succcessful translation of the Ballardian (as in J.G. Ballard) narrative approach to science fiction yet achieved in comics form.  This deeply creepy tale brings us face to face with a world where major corporate leaders so deeply internalize their own marketing messages and stock market hype that they become untethered from consensus reality and move into the ambiguous landscapes of delusion, paranoia and insanity that were so successfully mined by Ballard (and, to be fair, by many others, most notably Philip K Dick; but none so well as Ballard, who is most convincingly evoked here).  While the influence of Clowes is certainly evident in Kaczynski's work, he has created a wholly original synthesis here.  This issue is rounded out with contributions by MOME regulars Andrice Arp, Paul Hornschemeier and Kurt Wolfgang.  Encore!  Encore!

This item belongs to the categories: Copacetic Select, Anthologies, Special Sale
This item is part of the series: MOME
You may also enjoy these related titles: