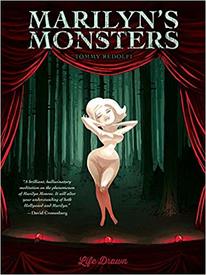 Marilyn's Monsters was originally published in France as Holy Wood – which is a better, more accurately evocative, but, perhaps, less marketable title than we have here in the English language edition from Humanoids – but the work's overall translation by Mark Bence in collaboration with Redolfi reads well, so this bowing to market forces is of little to no consequence (especially now that you know the original title).  That said, it is Redolfi's art and visual storytelling that is the main attraction here.  Redolfi has constructed an original and insightful take on the Hollywood dream factory that reveals it's underlying structure to be a synthesis of the classical European folk/fairy tale and Freudian psychology.  Marilyn's Monsters, while centered and focused primarily on the myth of Marilyn Monroe, is more a deconstruction of Hollywood.  There is darkly Lynchian vibe about much of the mis en scène, with particular hints of Mulholland Drive and Inland Empire. There's also a dash of Al Columbia evident in the feel of some the supporting characters and some of Darwyn Cooke's spirit lives on in the depiction of Marilyn herself.  Redolfi's work here is, however, much more than simply a synthesis of his influences.  Redolfi is a master storyteller.  Marilyn's Monsters is cohesive organic unity in which each spread is a consciously composed and finely crafted work.  In sum, it provides an inside-out look at the machinery of "star" production that, as the legendary film-maker David Cronenberg says in his cover blurb, is "a brilliant, hallucinatory meditation on the phenomenon of Marilyn Monroe.  It will alter your understanding of both Hollywood and Marilyn."

If this sounds like it's up your alley – it is!  Recommended.