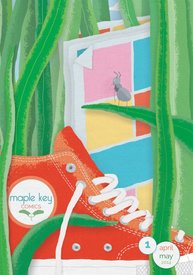 We're super excited to have received the first issue of Maple Key Comics! A new comics anthology series published out of White River Junction, Vermont, by a group of Center for Cartoon Studies grads and their immediate circle, and edited and designed by Joyana McDiarmid, this series shows a lot of promise. The concept here is to produce a big, fat comics anthology filled with ongoing, continuing series by a wide variety of artists and writers on a regular basis.  While this is a common practice in Japan, it is pretty much unheard of here in the US.  The first issue is a massive 327 pages (!) and features some really great work by the likes of Jon Chad, Sophie Goldstein, Carl Antonowicz, Sasha Steinberg, Rachel Lindsay and many others.  There is a definite – and welcome! – tilt towards science fiction in a number of the stories here, but, as we stated, there is plenty of variety here, with teen romance, nautical adventure, gothic horror, cooking, and many other sorts of tales on hand here for readers' delectation – something for everyone!  Make sure to take a look next time you're in the shop.  We're already looking forward to the next issue, which is due in June.  BACK IN STOCK!

This item belongs to the categories: Anthologies, Small Press Comics
This item is part of the series: Maple Key Comics
You may also enjoy these related titles:

An Embarrassment of Witches