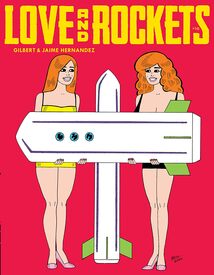 Gilbert continues his explorations of fame, fortune and fantasy via Fritz & Co.  This installment contains many intersections and linkages galore as body issues mix with body doubles, mirroring collides with projection, and (much) more.  Also, in this issue Gilbert’s restless experimentation has led him to provide readers with “Rosy’s Re-Cap”, a half-inch (!) tall strip of comics commentary running along the lower edge of ten consecutive pages of continuity. The magic of comics allows you to read this strip  separately – on its own – or read it simultaneously – together with the main feature – or mix it up.  The choice is yours!

And, then, on Jaime’s side of the house, Tonta’s orbit spirals ever closer to that of Maggie, until… yes, the magic moment we’ve all been waiting for arrives!  While out in the farthest reaches of space, Anima saves the day once again – but will her memory return?  and if it does, what does that portend?  The mysteries lengthen and deepen, like shadows at sunset on an alien moon….

Love and Rockets.  Where would we be without it?

This item is part of the series: Love and Rockets
You may also enjoy these related titles: