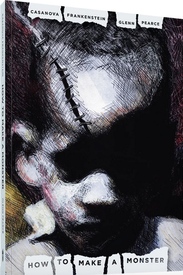 There are plenty of news reports emanating from Chicago concerning how harsh, difficult and violent life can be there, but we also know Chicago as a key cultural nexus, central to the development of Jazz, the Blues, indy Rock, and, of course, Comics.  Here in the 200+ oversize, black & blue pages of How to Make a Monster, the acerbic cartoonist – and Chicago native – Casanova Frankenstein teams up with Australian “outsider artist”, Glenn Pearce to present an unflinching – yet nonetheless fun – look at life from the inside of this seething cauldron, in the process providing insights into the formative impact that growing up in this environment can have on one’s personal and psychological development.

How to Make a Monster unquestionably has some overlap with My Favorite Thing Is Monsters, most obviously in their shared central metaphor and its incorporation into their respective titles, along with the fact that both contain autobiographical elements concerning growing up in Chicago – and also that both are published by Fantagraphics; but the similarities more or less end there, and it is ultimately in their differences that that the relationship between these two works is most intriguing. How to Make a Monster is definitely its own thing. That said, a meta-textual analysis of the two works in tandem could be fruitful.

And, should How to Make a Monster ever end up being made into a film – or Netflix series – an obvious choice for inclusion in the soundtrack – or theme song – would be the New York Dolls classic, “Frankenstein” (sorry, just had to throw that out there).

This item belongs to the categories: Graphic Novel
Search Copacetic
Just in:
See all recent arrivals...
Copacetica
Edifiying essays about all things Copacetic