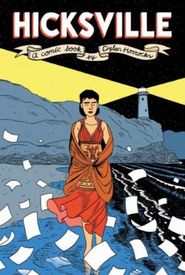 Here at Copacetic Comics, we've long been fond of calling Hicksville "The Watchmen of small press comics."  This is useful in that practically all comics readers are familiar with and have positive associations with The Watchmen, and we feel that Hicksville is a similarly ambitious, successful and important work, and so is one that we like to draw attention to, and comparing it to The Watchmen is a cheap and easy way to do so.  Whether or not this is a good, right or fair thing to say in regards to to the themes and content of the respective works, we're not going to try to defend.  The comparison's validity rests more on a historical point in that both are works whose central narratives, in addition to telling engaging stories, simultaneously serve to deconstruct the basis of the genres they are working in.  For Watchmen it is that of the superhero, for Hicksville it is the genre of autobio comics and its rise out of the world of comics fandom.  Now, back in print after a two-year hiatus, this new edition of Hicksville is, we feel, likely to be the definitive one, as everything about it feels just right.  Most especially the significant addition of an all new, all comics introduction by Horrocks that he himself states (in this quite-worthy-of-reading Publisher's Weekly interview) is "one of the most frank and personal things I've ever drawn."  This introduction is an important minor work in its own right and puts the proverbial icing on the cake of this seminal volume (preview it here).  So, for any and all Copacetic customers who have yet to experience this comics masterwork, we say:  now is the time.

Sam Zabel and the Magic Pen