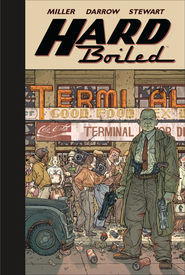 Hardboiled put Geoff Darrow on the comics map. This collaboration with Frank Miller is totally over the top and has influenced every artist working in this territory/vein ever since. Both at the level of detail and the level of violence, Hardboiled is completely bonkers. Together these aspects combine to create a truly biting satire of America. Now collected in hardcover for the first time (in North America). Another timely re-release from Dark Horse.  This edition has been entirely recolored by Dave Stewart, whose went for a somewhat darker/subdued look and the color more modulated/nuanced as compared to the original, bolder coloring by Claude Legris.  Some will prefer this version, others will prefer the original, but they're both good!

The Life and TImes of Martha Washington in the 21st Century

DC: The New Frontier - Volume One