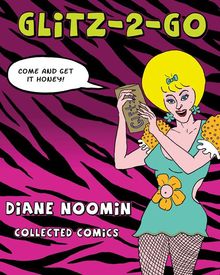 Here it is at last, after three decades in the wilderness of underground comics, Diane Noomin's signature creation, Didi Glitz, get's the deluxe, full-size trade edition treatment.  In black and white and full color as required, Glitz-2-Go has it all, from Didi's beat beginnings to her (off-off-off, as in San Francisco) broadway bonanza.  Also included are costumed fumetti romps with Diane dressed up as Didi, papier maché dolls, Christmas cards, etchings and more!  This is another career-spanning compendium by an underground comics legend.  Together with Aline Kominsky, Noomin created and edited the pioneering women's underground comics anthology, Twisted Sisters (and, yes, this comic book came before the metal band) that helped establish a collective voice for women in comics in the 1970s and 80s.  And, as it happens, as Kominsky married R. Crumb, Noomin married Bill Griffith, and both couples have lived happily ever after; A True Comics Fairytale!

This item belongs to the categories: Collections, Special Sale, Broke Christmas
You may also enjoy these related titles: