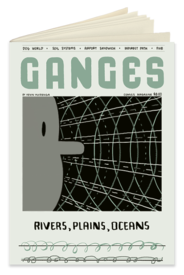 Kevin Huizenga makes comics like no one else.  He strives to bring the mechanics of consciousness to life in pen and ink on paper, in text and image, diagram and chart.  One of his primary concerns is the representation of the temporal dimension in the spatial, in capturing and organizing the implacable flow of time from infinity to eternity to the here and now on the page, and that is the primary focus of this issue.  He is aware that this is, ultimately, an impossible task, but attempts it nonetheless, knowing that this is what it means to be human.  In this, the fifth issue of his series Ganges, which started out as part of the Fantagraphics/Coconino Press press Ignatz series and is now being self-published by Huizenga and distributed by Fantagraphics (along similar lines to Sammy Harkham’s Crickets), Huizenga looks at time, and our experience of it, in all it’s diversity, in the present and through the lens(es) of history.  While there must be an objective temporal dimension that exists regardless of any perception of it, we do not fully comprehend what this is; our human experience of it is wholly subjective.  The interlinked stories that make up this issue (and which extend from the previous two issues, as well) reveal time to be the most basic building block in the construction of consciousness, and history – in its largest and fullest sense, encompassing archeology and even geology – as the essential structure that houses those accrued conceptions by way of which we work with time as well as in and through it.

Ganges #5 is a unique reading experience (well, unique outside of the Huizengian oeuvre, at least).  Huizenga boldly commits exponential shifts in the temporal scale, weaving a narrative that stretches from a traditional panel-by-panel rendering of second-by-second shifts in mood during a domestic argument to experimental fractal depictions of the natural soil erosion cycles repeating over eons that build up and breakdown the earth in the course of millions upon millions of years; from the immediate to the eternal. The result is a work that succeeds (where others have failed*) in presenting both in a manner that effectively situates each within the other in an equivalence that brings to mind the title of Samuel Delaney’s classic science fiction novel, Stars in My Pocket Like Grains of Sand (if not so much the novel itself).

One of the ways that Huizenga accomplishes this is by adapting to comics the literary technique developed during early modernism of folding stories within stories (within stories [within stories]), that is associated with Joseph Conrad, among others.  This method in turn parallels the employment of fractal visual tropes to effect a digestible representation of incomprehensibly large blocks of time.  The development of this strategy of a mutual reinforcement of the narrative by the visual – and vice versa – in support of a thesis is one of Huizenga’s signature accomplishments, and emerges here as a more or less implicit programmatic theme of the work.

One of these stories within stories is that of the 18th century Scottish naturalist, James Hutton, who was among the first to recognize that certain geological signs indicated that the earth was orders of magnitude older than the then prevailing wisdom (largely derived from scriptural authority) had it.  While the information presented on Hutton is derived from other sources, Huizenga, as usual, has, in addition to the matter-of-fact descriptive function inherent in its presentation, his own agenda for incorporating it:  to convey the nature and process of discovery, as well as its effects:  how does one see something that wasn’t seen before? what enabled a specific person to see what others before him or her had not? what was the experience like?  Discoveries don’t in any way effect, in and of themselves, any immediate actual change – except in the mind of the discoverer; the world remains the same as it was the moment before; the entire change occurs within the mind’s eye, as the world is suddenly seen through new eyes, as it were.  Comics is an ideal medium through which to communicate this shift in perception that is brought about by a discovery, for in comics it is possible to show what is seen within the mind’s eye in a quick and decisive manner that is exceedingly more difficult – and in some cases perhaps not at all possible – to accomplish in prose alone.  Even in comics, this task can be challenging, of course, and there are few, if any extant instances of visually conveying the level of complexity that Huizenga has managed here, and which it is the reader’s job to interpret and appreciate.

As if that is not already enough to chew on, Huizenga also, in this issue, newly incorporates into the ongoing narrative that is carried over from previous issues some refracted autobio elements self-reflexively related to his own, earlier comics work which, when read as such, has him dividing his own self yin-and-yang-like into complementary male and female halves.  In an intriguing twist on gender and identity, here it is the female side which takes the more active, leading role, while the male half takes the supporting, more passive role.

And there’s more!  Huizenga rewards himself at the conclusion of the issue with some “baroque” humor of a highly syncretic nature.

Really, we're only scratching the surface here.  There's quite a bit more that could be said.  Suffice it to say there’s quite a lot going on in this 32 page comic book.  This is a work that will amply reward the multiple readings it will require to absorb.

PLEASE NOTE:  As we are now down to our final copies – LIMIT:  ONE copy per customer. GONE!  (but we're going to see if we can source more copies; it may take awhile, but please check back...)

*In Ganges, Huizenga succeeds in effectively placing the quotidian within the quasi-eternal where others – most notably, Alan Moore & Co. in Big Numbers (originally titled The Mandlebrot Set, before receiving a cease-and-desist letter from Mandlebrot himself) – have failed (for all his undeniable genius, Moore is first and foremost a scenarist, not a truly visual thinker, and the structure of revelation that he hoped to erect in Big Numbers was unfortunately unweildy and collapsed under its own weight, whereas Huizenga, here in Ganges, cuts straight through the muddle with his visually buttressed narrative approach.

This item belongs to the categories: Copacetic Select, Small Press Comics
This item is part of the series: Ganges
You may also enjoy these related titles: