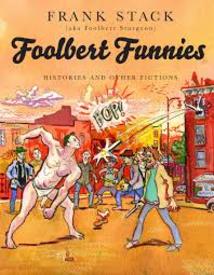 This 200+ page volume presents a selection of the work of underground comics pioneer, early independent graphic novelist and University of Missouri Professor Emeritus, Frank Stack.  Stack's career now spans nearly half a century, and the work herein presented was created between 1970 and 2007, with most emerging from Stack's post-1990 pen.  The comics originally appeared in a wide and sundry collection of publications, from his own, early underground comics like Feelgood Funnies and Jesus Meets the Armed Services, through classic antholgies like Weirdo, Rip Off Comix, and Blab!, to National Lampoon and Mineshaft.  Some of it is fantasy, some of it is fiction, some of it is folktale, and some of it is history, and it's all the work of a unique figure in the comics history of our times.

Now on SALE at a super special price!

This item belongs to the categories: Collections, Gift Catalogue, Special Sale
You may also enjoy these related titles: