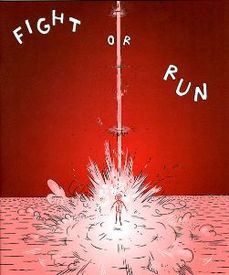 Yes, you read that correctly:  it's back-to-back Huizenga -- two new releases for November 2008 (the other being Or Else #5).  Well, this one's not entirely new.  Fight or Run, published by Buenaventura Press, is a collection of short strips that work to create a sort of comics shorthand for the language of game theory.  The strips that embodied the initial foray into forging this language first appeared a few years back in the Fantagraphics anthology, Blood Orange, which ran for four issues (we should have a few copies still floating around here, if anyone is interested).  We enjoyed those strips at the time, but then forgot about them.  Huizenga, clearly, did not.  He continued to plug in variables and hammer away at the possibilities until it reached critical mass.  The end result on display here is a synthesis of the language of comics, the mind-set engendered by years of video-gaming (which, in turn, is influenced by the history of role-playing games), and the basic principles of logic which leads to a laconic distillation of the decision making process that can be enjoyed for a quick laugh, studied for insights into how to enhance one's own decision making, and pondered over to reflect upon the nature of thought.  Fight or Run is Huizenga's most purely formal work yet.  In some respects, the work here reminds us of a rigorous take on Harvey Kurtzman's seminal "Hey Look!" strips, updated for the 21st century.  On the other hand, it can be seen as taking Brian Chippendale's Ninja, and paring it down to its core essentials.  Whether the reality regarding these comparisons is either, and, or neither, Fight or Run is a success on its own terms and should be considered essential reading for anyone interested in expanding the possibilities open to comics.

WE FINALLY SCORED SOME COPIES - SO, BACK IN STOCK... FOR NOW!

LIMIT: ONE PER CUSTOMER