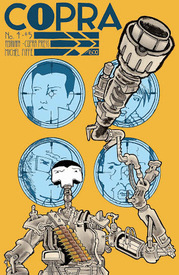 There's been a lot of interest and excitement generated by this self-published (monthly!), 24 page, full color title written and drawn by Michel Fiffe, and now that we have the comics in the shop we can see why!  It may be the first true post-Fort Thunder superhero team book (we'd like to know what Chippendale thinks of this...). Our first impressions were something along the lines of:  the drawing energy of Frank Miller's Ronin via some of the conceptual aspects of Grant Morrison's Doom Patrol seasoned with a bit of the cosmic quirkiness of Joe Casey and Tom Scioli 's Godland.  Evidently, however, Copra is inspired – at least in part – by Fiffe's quasi-obsession with Suicide Squad, the 1980s DC title by John Ostrander, Luke McDonnell, Kim Yale & Co.  Regardless, this is an artistically original and highly enthusiastic take on the the superhero team book that is invigorating its readership. These issues are small batch print runs (although he is, evidently, not averse to reprinting; our copies of #1 and #2 are second prints) so don't spend too much time making up your mind about this one.  Once you get an eyeful at Fiffe's site, we think you'll be able to come to a decision pretty quickly.