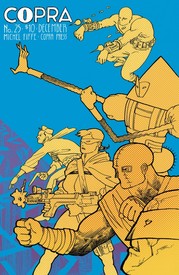 Whoops!  We forgot to list this on the site.  Yes, we have copies of the 25th "Anniversary" issue of Copra.  Not only does this issue feature the beginning of a new story-arc, and so is a good jumping on point for new readers, who, once Copra: Round Four is realeased later this year, be able to get the first 24 issues in trade editions, but it is also a "giant-size", 48 page issue, jam packed with bonus pin ups by the likes of Jeffrey Brown and Chuck Forsman, and two back up stories by Tim Hamilton and Benjamin Marra!