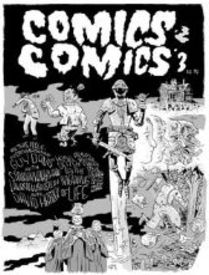 Where traditional Japanese manga is lengthy, old school American comics are large, and Comics Comics is doing its part to keep this tradition alive by being printed on a web-press in newspaper format in the arm-spanning 44" x 28" (when held open) of the good old days.  This issue is filled with articles, essays, interviews and reviews by and about the likes of Sammy Harkham, Guy Davis, David Heatley, Lauren Weinstein, Frank Santoro, Dan Nadel and Timothy Hodler, and is filled throughout by humorous marginal illustrations by Matthew Thurber (think Sergio Aragonés in Mad Magazine).  The back cover is a gigantic, suitable-for-hanging-on-the-wall extravaganza by the one and only Marc Bell.  A must for comics cognoscenti everywhere.