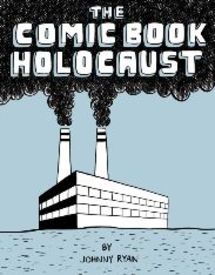 Well, it was bound to happen sooner or later.  The mischevious Mr. Ryan has pulled out all the stops to create the last word in jaded, cynical, parodic lampoons of all things comics in this collection of 128 pages packed with vented spleen.  Just about every comic strip, comic book series and graphic novel that a contemporary comics fan could be expected to be familiar with is given the works here.  Every scatological combination is employed and no one and nothing is spared.  The goal here seems to be to defend the western philosophical thesis that nothing is sacred, all is illusion and all illusions must be destroyed; along with its eastern corollary: nothing is true, everything is permitted.  While we are happy to grant Mr. Ryan his point, there is clearly a soul crushing aspect to this work.  The cover and title of this book are certainly fitting, as it is precisely the nihilistic disregard (also known as hate) of the beliefs and values of others that is demonstrated in this collection that was fervently embraced by the Nazis and led them to attempt to destroy all that they despised (which was just about everything).  We are, of course, grateful that Mr. Ryan has limited his targets to the creations of graphic imaginative fiction and that his only weapons are his pen and caustic wit, and that his victims are only lines on paper.  If the reader can manage the feat of viewing the entire work as a cautionary allegory of the dangers of yielding to the siren song of hatred, then, perhaps, CBH can act as a final solution and allow all involved to at last move on to more productive endeavors.