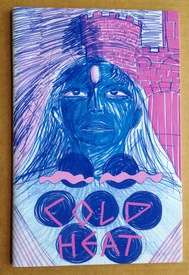 It's been well over a year since the last issue of Cold Heat appeared, but we're here to tell you that this is one comic book that was worth the wait!!  It's a 48 page double issue printed in the trademarked Cold Heat two-color process employing magenta and blue.  It's comics at their most adventurous and risk-taking, produced by creators who have the experience, skill and training to get to the other side, and, crucially, to take the reader there along with them -- but you'll have to pay close attention and hold on tight as it's quite a trip!  A key to understanding this work is that its true subject is the relationship between the perception of reality and the representation of reality, between the signifier and the signified; how the representation of reality creates a feedback loop which transforms reality in the process.  And there is a special focus on the relationship between subjectivity and perception, particularly on how emotional and chemically altered states of mind alter the perception of events which then alters their representation and is capable of altering their actual outcome as well.  This is a task to which comics are ideally suited and which Frank Santoro has been in the vanguard of exploring.  With this issue he has pushed the furthest yet into this unmapped and only dimly comprehended artistic territory.  Yes, this is one pricey comic book, but the economics of today's comic book market have forced the publisher into a corner and so this edition is being produced in an extremely small quantity for the True Believers.

This item belongs to the categories: Small Press Comics, Copacetic Collectibles, Copacetic Select, Made in Pittsburgh
This item is part of the series: Cold Heat
You may also enjoy these related titles: