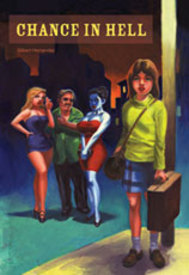 It's here, another all new, original graphic novel by Gilbert "Palomar" Hernandez (who must be working overtime these days).  The title and the dustjacket painting (by Hernandez-pal, Rick Altergott) set the tone with their clear evocation of 1950s pulp paperback covers -- think Jim Thompson:  you know right away that this story is going to take you to the wrong side of the tracks.  The novel -- and it is graphic in every sense of the word -- opens with a lengthy prelude that has to rank as one of the greatest evocations of lawlessness ever accomplished in any medium.  Set in a seemingly endless garbage dump that has been narratively constucted as the "outside" to the inside of "the city," the vision we are presented with is a brutal ballet demonstrating the consequences of a viral despair catalyzed by long-term, unmet human emotional needs.  It is unsparing in its presentation of the ensuing spiral into chaos that such despair inevitably generates.  This sequence will leave you haunted, and its climax creates the window through which the central character, the ironically (or, then again, perhaps not) named "Empress," -- who is, at this point, a small child -- escapes to the city, whereupon the next, more sophisticated and complex manifestation of hell transpires, and in which Empress has become an adolescent.  Here we have the classic battle between the spirit and the flesh; idealism and cynicism.  And while hope is held out for the former, it is, inevitably, the latter that triumphs here -- we are in "hell" after all.  The third and final act -- save for a brief coda -- brings us Empress as a married woman.  Intriguingly, from this perspective, the preceeding events come to be viewed as a series of repressed childhood traumas which now serve to inform her present day behavior, adding a specifically psychological dimension to the narrative.  The roots and repercussions of the inability to emotionally connect form the crux here and, finally, through a synechdochical episode, bring the reader full circle to an abreaction of the childhood trauma and, thereupon, resolution.  Added on top of it all, as the proverbial icing on the cake, is the "fact" that Chance in Hell is "actually" a movie featuring, in a relatively minor role, a long running Love and Rockets heroine, the B-movie actress, Fritz.  Thus, this graphic novel "takes place" in the Love and Rockets universe, although in a narratologically problematic manner.  Gilbert Hernandez is a master of comics and with Chance in Hell he has managed once again to expand the boundries of the form's  artistic territory.

This item belongs to the categories: Graphic Novel
This item is part of the series: The Fritz B-Movie Collection
You may also enjoy these related titles: