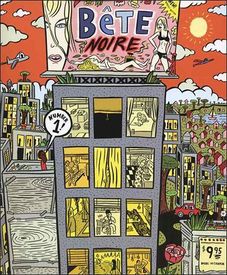 <<• edited by Chris Polkki •>>  Don't let the fact that some of your favorite comics anthologies are concluding their runs get you down:  there's a world of comics out there waiting to be discovered.  Take this swell 100-page anthology from 2005, for example.  We thought it was long gone, but we stumbled on a source and so are eager to let late-comers in on this swell package of comics from around the world, with a special emphasis on the Japanese avant garde.  Bête Noire features what we believe was the first North American publication of Yuichi Yokoyama, as well as works by fellow Japanese manga masters Junko Mizuno, Ichiba Daisuke, Takeshi Nemoto and Suzy Amakane.  Also on hand are Helge Reumann of Switzerland, Anke Feuchtenberger of Germany, Ludovic Debeurme, Lucie Durbiano and Caroline Sury of France, as well as artists from Italy, Spain, Finland, along with Kevin Scalzo, Renée French and cover artist David Heatley from the USA.  Recommended for readers of Kramers Ergot, MOME and Blood Orange (which Mr. Polkki also edited).

This item belongs to the categories: Anthologies, International
You may also enjoy these related titles: