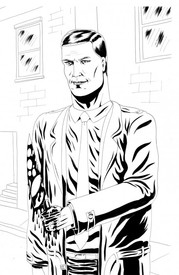 We thought these were all gone, but we were wrong!  Just snagged a small pile.

'Floating World has teamed with Traditional Comics to reprint Benjamin Marra’s sold out Elf Booklet series, Drawings Inspired by the Motion Picture “American Psycho”. The original artwork was rescanned and published as a 32 page broadsheet -- 15” x 22.75” (!!!) -- newspaper. Three new illustrations and brand new covers were created for this limited edition of 1500 copies.

Employing Raymond Pettibon’s aesthetics and inspired by the movie “American Psycho”, these 28 illustrations “seem almost mathematically calculated to haunt the eyes they meet: whether it’s the sublimely balanced blacks and whites or the point-of-impact axe to neck shots… the real story here is Marra’s art, which is far and away the best work of his career.” – Matt Seneca, Comics Alliance'

We're down to our last few copies on this... GONE!