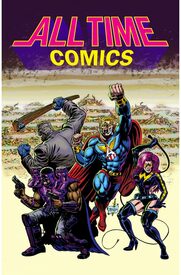 Old world meets new world as indie cartoonists and classic comic book creators collaborate with Editor-In-Chief Josh Bayer to unleash a superhero book that dares to follow its own path. ALL TIME COMICS embraces old-school, four-color nostalgia to deliver everything you could hope for in comics, a seamless circle between the past and the future. Collects the first six issues of All Time Comics: Crime Destroyer #1 & 2, Atlas #1, Bullwhip #1, Blind Justice #1 & 2.

Atlas – his only weakness is fear!
Blind Justice – the man who walks through bullets!
Bullwhip – here to put a stop to the bullsh*t!
Crime Destroyer – will fight for justice or die trying!

These four heroes face an over-the-top lineup of villains including The Misogynist, Raingod, White Warlock, Krimson Kross, P.S.Y.C.H.O., and the Time Vampire.

NOW ON SALE FOR A SUPER SPECIAL PRICE!

(And All Time Comics Deathscape Zerosis is ALSO on sale, HERE!)