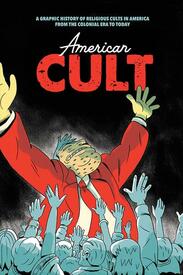 OK, get ready for a roller coaster ride of euphoria and terror, agony and ecstasy, megalomania and paranoia in this 200 page, black and white softcover comics anthology that examines the phenomenon of American cults in eighteen separate works all created especially for this volume and appearing here for the first time.

For the purposes of this anthology, the editor, Robyn Chapman defines a cult as being a group of individuals sharing a belief system that challenges societal norms, who freely cohere around a charismatic – but ultimately totalitarian – leader, for the purposes of forming a community.  These communities share a wide variety of beliefs, ranging from the Oneida Community in mid-19th century New York to the Manson Family in 1960s California, from the The People's Temple of Jim Jones that found its terminus in Jonestown to the Westboro Baptist Church, and many more in between, including MOVE in 1980s Philadelphia.  Also included are a look at the cult-like aspects of branches of Orthodox Judiasm and a fundamentalist Mormon "splinter group."

Stuck in the Middle: Seventeen Comics from an Unpleasant Age