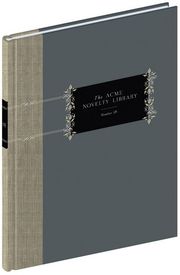 The 2007 Chris Ware trifecta is now complete(see below).   Ring out the year immersed in these fine-tuned renderings of early 21st century urban angst.  Chris sez:  "In keeping with his athletic goal of issuing a volume of his occasionally lauded ACME series once every new autumn, volume 18 finds cartoonist Chris Ware abandoning the engaging serialization of his "Rusty Brown" and instead focusing upon his ongoing and more experimentally grim narrative, 'Building Stories.'  Collecting pages unseen except in obscure alternative weekly periodicals and sophisticated expensive coffee table magazines, The ACME Novelty Library #18 re-introduces the characters which New York Times readers found "dry" and "deeply depressing" when one chapter of the work (not included here) was presented in its pages during 2005 and 2006. Set in a Chicago apartment building more or less in the year 2000, the stories move from the straightforward to the mnemonically complex, invading character's memories and personal ambitions with a text point size likely unreadable to human beings over the age of 45. Reformatted to accommodate this different material, readers will be pleased by the volume's vertical shape and tasteful design, which, unlike Ware's earlier volumes, should discreetly blend into any stack or shelf of real books."

This item is part of the series: Acme Novelty Library
You may also enjoy these related titles: