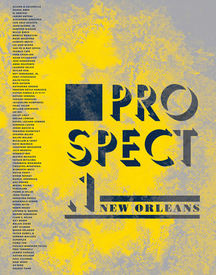 CopaceticCrazyDeal!  Here's another piece of just discovered PictureBox buried treasure.  This massive, oversize, 408 page hardcover is the official catalogue of the the exhibition of the same name that was held in roughly twenty different venues throught the city of New Orleans, from 1 November 2008 through 29 January 2009 – several years after its being battered by Hurricane Katrina.  It contains over 700 color images, along with 50 B & W.

Here's the official D.A.P. hype from its original 2008 release:

As the accompanying publication to the largest exhibition of contemporary art ever assembled in the U.S., the Prospect.1 New Orleans catalogue is one of the most sought-after art books of 2008-09. Featuring new illustrated essays on New Orleans and its place in twenty-first century America by Prospect.1 organizer Dan Cameron, art historian Barbara Bloemink, journalist Lolis Eric Elie and curator Claire Tancons, the book also includes a fully illustrated section on each of the 81 participating artists, who include William Kentridge, Trenton Doyle Hancock, Fred Tomaselli, Cai Guo Qiang, Sanford Biggers, Tony Fitzpatrick, Amy Sillman, Malick Sidibe, Clare E. Rojas and Monica Bonvicini, among many others. Locating contemporary art in the cauldron that is New Orleans adds a new dimension to the book and its visuals: It's an incisive statement on art making and humanity today.