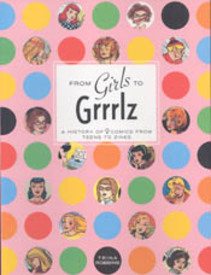 retail price - $17.95
copacetic price $17.95
From Girls to Grrrlz: A History of Women's Comics from Teens to Zines
published by Chronicle Books

From Girls to Grrrlz:
A History of Women's Comics from Teens to Zines
by Trina Robbins

This is a nicely produced oversize survey by the grand dame of women's comics, Trina Robbins.   It's chock full of full color illustrations, and covers the history of women and comics -- as characters in as well as creators of -- from the 1940s through the 1990s.   This book makes for a good gift as it is a great introduction for someone who is only casually aware of the relationship betwen women and comics but would like to learn more.  We've had this book in stock since it's initial publication.

Boys aren't the only ones who read comics. From Betty and Veronica to Slutburger and Art Babe, veteran comic book author Trina Robbins explores the amazing but true history of girl comics. This is a chronological pop culture commentary—with attitude—on the authors, artists, trends, and sassy, brassy characters featured in comic books for the last half-century. Illustrated with more than 180 images of comic book pages and cover art, the book reviews the bubble-headed bombshells of the '40s, the lovelorn ladies of the '50s, the wimmin libbers of the '70s, and the grrrowling grrrlz of today.

"What's delightful about Robbins' opinioned history—aside from the gorgeous design and tasty art—is that it begins in 1941 with Archie, the now 58-year old teenager. Using examples from '40s to the present day, Robbins applauds little-girl heroines, such as Little Lulu, and smirks at strange role models like Tessi the Typist. Robbins's smart and zingy narrative guides us through the ups and downs of girl-centered comics from fashion model and paper doll comics to "true romance" tales. It's fascinating stuff, and if you're not already a comic-book hound, you may be tempted to become one."—SFBay Guardian