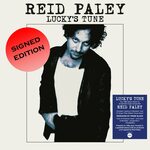 Reid Paley's now classic 1999 debut solo LP, Lucky's Tune has at long last been released on (140g) vinyl, in a limited, SIGNED, gatefold edition of 1000 copies from Demon Records in the UK.

A key architect of the Pittsburgh punk scene, among whose many roles were show promoter, gig securer, venue locator, press liaison, actor in the seminal Pittsburgh punk film, Debt Begins at Twenty and, oh yeah, being the front man for Pittsburgh's greatest punk band (which later relocated to Boston), THE FIVE, Reid has gone on to have a lengthy solo career, based in Brooklyn, NY where he continues to write, record and perform his unique brand of music, both solo and with his trio.

Here on Lucky’s Tune, listeners are in for an up close and personal experience.  It’s just Reid and his 1955 Gretsch Archtop, plugged into a 1965 Fender Super Reverb.  Recorded at House of Blues Studio and produced by Frank Black, the sound is spare, raw and straightforward.

Each of the thirteen tracks – all penned by Paley – that make up Lucky’s Tune present a persistent personal praxis in lyrical form.  Punctuated by Paley’s trademarked pauses, rests, cæsuras and fermatas the songs rise and fall, thrust and parry, building up tension to the breaking point before then knocking it down.  Learn more – and listen to this LP's lead track, "Lazarus in Brooklyn" – HERE.

Copacetic VinylMaster, Dan Allen has this to say about the quality of the record itself:  "Lucky's Tune sounds fantastic. There is hardly any surface noise (which is sadly, almost a given with current hastily-pressed LPs) and the record sounds loud in all the right places. Whoever mastered the recording for vinyl knew what they were doing and luckily, the pressing plant took their time creating the LPs.”     Lucky’s Tune really is a one of a kind listening experience.  Don’t miss it.   AND, for those of you in the New York City metropolitan area, a Record Acknowledgement Event is being held for Lucky's Tune on the evening of Thursday 18 August 2022 at The Main Drag Community Center in Brooklyn, featuring a live performance by The Reid Paley Trio – the first since... well, quite awhile!   Details, HERE.
Search Copacetic
Just in:
See all recent arrivals...
Copacetica
Edifiying essays about all things Copacetic