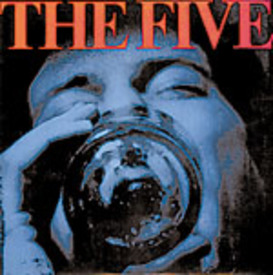 Believe it or not, we still have some factory sealed copies of the original 1989 vinyl LP release of THE FIVE,
straight out of the original pressing plant boxes, in gleaming black vinyl, and are currently offering them for the amazingly
copacetic price of $16.75


"Clearly the most pivotal and important of all Pittsburgh bands.THE FIVE, (who relocated to Boston in 1984) check in here with this, their first ever LP.  Recorded in 1986 and '87 shortly before their untimely demise, these songs are on par with their live show, which was, believe me, killer.

Some of this material dates back to the early '80s and just goes to show how ahead of their time these guys were.  In my opinion, a must."
--Maximum Rock n Roll

"Pittsburgh's quintessential mutant-blues band, THE FIVE, whose music was never available on anything but indie singles and underground tapes, have, of course, been immortalized on LP now that they're defunct.  'Sort of like dressing a corpse up for the prom, isn't it?'  is how the band's former front - and affront - man, Reid Paley, describes this good, loud anthology."
--GQ

"And expansive sound that blends influences as disparate as garage, blues, and post-punk into a totally original concoction all their own."
--Hoboken Pulsebeat

"A sound that can simulate the effect of one's being hit upside the head with a very large piece of sheet metal. Must I spell it out for you?  I am overwhelmed."
--The Noise

"THE FIVE had the raw smell of adventure.  Live favorites like All The Way have been translated to vinyl with their throbbing menace intact. When (the band) locked in, as they do on THE FIVE, they crackled like a kerosene-soaked bonfire."
--Boston  Phoenix

"THE FIVE had quite a following, and a good set of drunken, rhythm-laden rock 'n' roll.  Even though the band broke up almost two years ago, this record doesn't sound dated, and Reid Paley's vocals are like nothing you've ever heard before."
--WFNX Boston  Juanita the Scene Queen

"They lived and played in Boston for a buncha years, cut a number of rankin' tunes that were local radio hits, then called it quits.  A thuggily rocking bunch, THE FIVE seemed straight outta some slidey, gruff, post-Stones continuum, and Reid Paley's voice has enough grug-monstrosity to fill one of my brain nooks exactly, and this eponymous LP, THE FIVE is a worth-dripping pit filled with true 'street rock shit.'  The whole thing is way okay.  Which is not a phrase that gets bandied about much down here."
--SPIN

"THE FIVE are rather like post-existentialism, only much, much louder."
--The Noise

"They were incredible. I've never seen anything like them before or since.  And that singer, Reid Paley.  Oi vey!  What a genius!  Too bad they broke up.  I heard they had a posthumous release."
--Dance Music Report

"One of the best bands in the entire country is THE FIVE.  Tough, lean songs with a driving funky beat."
--Offense Newsletter

"Sometimes it takes an outside band to reveal just how genre-bound and stratified the local scene has become...A monster of a sound."
--Cambridge Chronicle

"If you liked THE FIVE when they were around, this posthumous record will bring them back in all their whiskey-sodden glory. The band broke up two years ago, yet their big radio tapes THE LONG HAUL and SAME TO ME and WHEN YR DONE,contained here, still carry their drunken swagger.  Reid Paley's voice is comparable to none (ask any critic) and gives THE FIVE their trademark."
--The Noise

"A hard, harrowing LP from an intriguing band."
--Boston  Phoenix

"THE FIVE ROOL, of course, and don't you forget it.  And Open Casket -- I mean, what a great idea to put this near the end of a bizarro idiot-gawd-avant-grunge garage-psychosis album -- this sorta slow blues grinder with clean guitars and phlegmy holler courtesy the one, the only Reid Paley."
--The Noise

"Mercy!  Bass lines so thick you could eat them with a fork, stop-me-before-I-hurt-somebody guitar work, a murder-on-a-deserted-street sound...Somebody better record these guys!"
--The Liberty Guardian

THE FIVE These Days:

DAVE DOREMUS
Is a father of three who tunes and restores antique and modern keyboard instruments in New Orleans.

BRIAN GILLESPIE
After tours, singles, and cd's with My Life with the Thrill Kill Kult,
Busted Statues, Concussion Ensemble, and numerous bands in Boston, Brian
is now (temporarily?) retired from the musical mainstream and residing
in Boston.

Get original, factory sealed copies of THE FIVE  LP in Gleaming Black Vinyl Right Here at Copacetic
for the copacetic price of $16.75