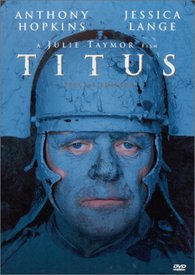 With Titus, Julie Taymor proves herself to be one of the very few film directors to successfully employ the visual vocabulary invented by Italian Film Director Federico Fellini and make it speak to her own concerns.  That she did so while simultaneously wedding it to the vocabulary, aims and genius of Shakespeare makes this film a truly spectacular achievement.

An Elizabethan blockbuster, Titus was, as director Taymor notes in the question and answer session recorded at Columbia University that is included on the second disc of the special edition DVD, one of Shakespeare’s biggest hits at the time of its original release.  This is a play that pulls no punches, that goes right for the jugular -- literally as well as figuratively-- every time.  At its heart is a bitter delineation of the vicious and endless cycle of violence begotten by vengeance.  In a world with vengeance at the root of every action, Titus systematically reveals that horror and destruction are the only, inevitable and tragic result.  In the film's most significant authorial intrusion upon Shakespeare’s original, Taymor has appended semi-Brechtian bookends featuring a pubescent boy the function of which is to urge the audience to learn from the tragedy that has unfolded before them, to recognize the difference that personal choice can make, and to thereby feel that there is room for hope in all of this; something that Shakespeare’s original does not provide for, at least certainly not nearly so explicitly.

Shot primarily on location is Rome, and utilizing the talents of many of the same Cinécetta craftsmen who worked on Fellini’s films, Taymor and company's interpretation of the play is a stunning visual tour dé force that craftily integrates 20th century motifs, costumes, props, and locales into this drama set in ancient Rome, reinforcing the essential timelessness of its eternal verities.  Cinématically seductive, the film proffers a series of eloquent and haunting images possessed of such strength and beauty while simultaneously  propelled by Shakespeare’s epic genius that the viewer’s emotional defenses will be breached and she will find herself swept away into a fabulous nexus of intellectual sensuality, emerging only as the closing credits roll, dazed yet subtly altered. Titus is, finally, not a film that is watched, but rather one that is experienced.

The Diving Bell and the Butterfly

The Personal Best of Monty Python