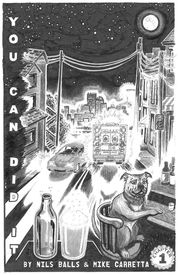 retail price - $5.00
copacetic price $5.00
You Can Did It #1
Nils Balls, Mike Carretta
published by Self-published

There were doubters, who said this day would never come – but they were wrong!  The yinzer beer lover's comic book has arrived.  You Can Did It is a paean to the potent powers of fermented hops and the life that goes with its consumption right here in tha 'Burgh.  Mitch and Ollie are a couple of regular guys who are also regulars at their local tavern.  In a twist on the mythical origin of many a super hero icon, the pair hit upon the secret formula for the ancient ur brew – the apotheosis of ale – and life takes a turn for the better – or at least it seems to; we'll have to wait and see what the rest of the story brings.  The real enjoyment here, however, is in soaking up the genuine Pittsburgh vibe that permeates every line.  Here is a pen and ink slice of life that you can almost taste.  And, to be clear, this is not just any old comic book.  As any beer connoisseur knows, the best beers tend to be made by small-scale, "micro-" and home-brewers such as Mitch and Ollie; the same holds true in comics.  You Can Did It is a finely crafted comics work that Nils and Mike took their time on to make sure they hit all the right notes; we're here to tell you that they did it.  Readers will savor every page and smack their lips with satisfaction as they close the cover and lay it back down on the bar.  The only downside here is waiting for a refill.  It's likely to be awhile before you'll be able to toss back the next issue.  But as we all know, you can't rush quality; as with the process of fermentation, you have to take your time to get it right; you'll know when it's done.

This item belongs to the categories: Handmade, Small Press Comics, Made in Pittsburgh, Gift Catalogue
You may also enjoy these related titles: 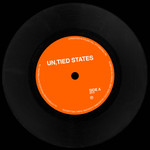