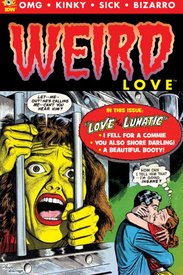 >> edited by Craig Yoe <<
Weird Love is a new collector series from the House of Yoe.  Featuring 48 pages of old school romance comics from back in the day – in this case from betwen 1953 and 1968 – this issue is well worth the price of admission.  The cover story, "The Love of a Lunatic" is an ACG classic – originally published in Romantic Adventures #50 in 1954 – drawn by the one and only Ogden Whitney.  This issue opens with another early romance comic classic, "I Fell for a Commie," from Love Secrets #32, published in 1953.  As usual with Yoe productions, the selection of material is great, the production is good, and the presentation is schmaltzy to the point of misrepresentation.  The stories collected here – a least the pre-code ones – are actually relatively straightforward tales that address common concerns of the day, albeit in the highly melodramatic fashion required by squeezing complex stories into 6 to 12 pages of comics (quite an accomplishment, when you stop to think about it), that are created month after month.  It is, in our opinion, a disservice to the material to emblazon "OMG" "Kinky" "Sick" and "Bizarro" across the cover (and, "Yoe-mance"? was that really necessary?) of a comic book containing solid, engaging works of comics melodrama – again, at least in the case of the pre-code stories.  That the stories presented in Weird Love #1 which originate in the late 1960s are indeed relatively trite and occasionally ludicrous it is hard to argue, but even these do not warrant the labels being applied here.  So, read these great stories, but "Don't Believe the Hype."

This item belongs to the categories: Classic Comics Collections, standard pamphlet comic book
You may also enjoy these related titles: