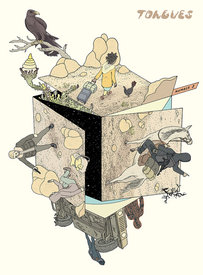 #3 is finally here!  Those of you who bought the first two issues don't need us to tell you anything more than that. For the rest of you, well... Tongues is the next large canvas production by the creator of Big Questions, Anders Nilsen.  As with Big Questions, it requires committed readers who will sign up for the long haul, as there are many years to go yet before we reach the conclusion of this epic, multi-layered narrative.  But, based on the evidence of the first three issues, it is sure to be a most rewarding comics excursion.  A sophisticated blend of myth, legend, current events, geopolitics, philosophy and science fiction, all artfully woven to instill a sense of the uncanny in the reader, and articulated through a masterful employment of the comics language, Tongues is both intellectually challenging and an æsthetic treat.  Nilsen has spent almost the entirety of his career creating black and white comics in pen and ink.  In Tongues, he has revealed his heretofore largely hidden talents for working in full color, creating a far ranging set of palettes to represent different times of day as well as different spheres of reality.  Even three issues in, we have only the barest idea of where the story is going, but so far it has been a voyage like no other.   All aboard!

God and the Devil at War in the Garden