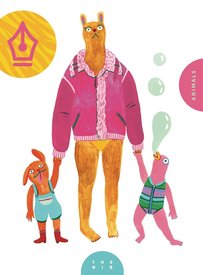 Here's the offical word from The Nib:

Animals: we love them, we eat them, we meme them, we are one.

Four cartoonists on their absolute worst pet ever.

Comics journalism on the tragic trade of smuggled birds by Dorian Alexander and Levi Hastings.

Stories from around the world: Laura Athayde on myths surrounding the Amazonian dolphin and Mike Centeno on bullfighting in Venezuela.

Arwen Donahue’s memoir of raising goats explores the divide behind the city, the farm, and the slaughterhouse.

Be Gay, Do Comics! – Queer History, Memoir, and Satire from The Nib