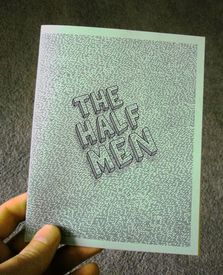 The Half Men
Kevin Huizenga
published by Self-published

Hot off the press and fresh out of the box - a brand new , self-published, Kevin Huizenga comic book! The Half Men includes his previously published contributions to NoBrow #6 ("Second Attempt") and Kramers Ergot #8("The Half Men", in which he "covers" – i.e., redraws/reinterprets – a story of the same name that originally appeared in Mysteries of Unexplored Worlds #8, originally published in 1956) as well as the new work "Bona, chapter 1", which is a redrawing of the first 16 pages of Kona #1, originally published in 1962.  See old comics in a new way.  33 pages of comics in all!