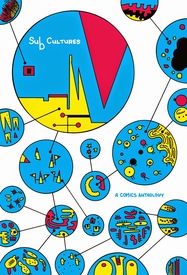 Here's a great new anthology published by 9th Art Press that features a whoppin' three dozen tales each focusing on a unique subculture.  It should come as no surprise that our civilization's growing trend towards ever-increasing specialization is accompanied by a parallel trend of ever-increasing social compartmentalization.  Aided and abetted – and in some cases entirely enabled – by all things internet, most notably, of course, the fertile soil of social media, subcultures are sprouting and thriving as never before.  This is not an unalloyed good, as some subcultures are possessed of varying degrees of toxicity, such as child porn devotees and violent extremists of all stripes up to and including "terrorists."  Yet, generally speaking, the phenomenon of subcultures is creating a new and vibrant ecosystem of human potential that will, in the long run, surely form the component bases for a spawning ground for the evolving of new and progressively adaptive ways of being that will assist humans in their braving of the new world they are in the midst of creating.  The SubCultures delved into in this anthology range from the relatively erudite circles of Esperanto speakers and ham radio operators to the freaky worlds of BIg foot enthusiasts and goth fetishists, but most revolve around varying permutations of pop culture, the last and certainly not least of which is that of the small press comics subculture itself, of which this volume is a prime example.  This is an absorbing and intriguing anthology, and there is plenty to ponder while traversing the subcultural terrain mapped out in this volume's 200+ pages by 37 comics creators including Sam Alden, Box Brown, Andrew Greenstone, Dan Mazur, Hazel Newlevant, Liz Prince, Stevie Wilson and many other talented cartoonists. Recommended!