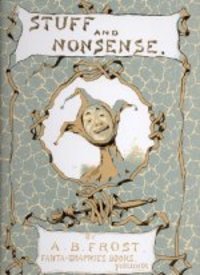 This is a giant-size (11 x 13) hardcover that makes the claim that the work by A.B. Frost  which it contains represents an important precursor to Comics as we know them.  While not considered comics at the time of their creation -- for the simple reason that comics had yet to be defined as a separate category of art -- A.B. Frost’s work meets Scott McCloud’s definition of comics as text plus image arrayed in sequence to represent the passage of time.  Comics scholars will be hard pressed to resist this one.  Definitely worth a look.  Book designed by Chris Ware.