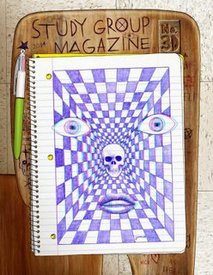 Attention Connor Willumsen fans:  We've just got a hold of a healthy batch of this hard to find item which includes an amazing full color Willumsen piece that is available nowhere else – and, of course, much else besides: see below.

<<•>>  edited by Zack Soto  <<•>>
It was a long time coming, but the third  – and 3D! – issue of the one and only Study Group Magazine has arrived.  The centerpiece of the issue is a celebration of 3D comics, and one of the form's prime progenitors, Ray Zone, who passed away in 2012.  The 3D comics start out with a celebrated Kim Deitch tale, "4-D", with separations by the only and only Ray Zone.  This is followed by a brief history of the 3D comics by Jason Little, who is responsible for all the 3D seps that follow on comics by Dan Zettwoch, Chris Cilla, Malachi Ward, and one drawn by Little himself.  But thats only the center section!  There are plenty more awesome 2D comics in full color, duo-tone and black white.  The highlight has to be the stunning twelve-page full color story by Connor Willumsen, but there is plenty more to be looking forward to here, including work by Sean T Collins and Julia Gfrörer, Benjamin Urkowitz, Mia Schwartz, Trevor Alixopulos and Sophie Franz, plus engaging articles –  Rob Clough on the significance of Ryan Sands, who has played a major but little recognized behind-the-scenes role in the development of 21st century comics as an editor (Electric Ant), publisher (Youth in Decline) and translator (of manga, such as Suehiro Maruo's The Strange Tale of Panorama Island); James Romberger on William Burroughs (which includes an excellent comics adaptation of a short Burroughs tale by Romberger himself, "Shits versus Johnsons"; and Sean Wittzke on Scud the Disposable Assassin.  Plus "a conversation" between Milo George and Ronald Wimberly about Wimberly's hip hop inflected adaptation of Shakespeare's Romeo and Juliet, which is follwed by a review of the same by Sarah Horrocks.  All wrapped in an amazing cover by Jim Rugg.  Bonus:  3D glasses are included with every issue!

And now also part of the Study Group SET SPECIAL

This item belongs to the categories: Anthologies, Small Press Comics, Copacetic Select, Featured Item
This item is part of the series: Study Group Magazine
You may also enjoy these related titles: