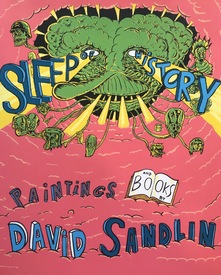 Here is your best single opportunity to experience the full range of the uncategorizable works of David Sandlin.  Schooled in art and painting at the University of Alabama, Birmingham (UAB) during the late 1970s, but harboring within a deep love of comics (especially those of Jack Kirby) and a burgeoning affair with Punk Rock, Sandlin quickly made his way to New York City upon graduation and became enmeshed in the early '80s art and music scene there; in the process coming to the attention of Art Spiegelmen and François Moulay (among others) and ending up in their groundbreaking comics anthology, Raw, while at the same time producing prints and paintings and getting shown by Gracie Mansion in SoHo.  And, well, as they say, the rest is... (all here in Sleep of) History.

And for anyone reading this entirely unfamiliar with Sandlin's work, while we can categorically state that formulaic comparisons uniformly fail to do justice to artists, in order to point potentially interested customers' expectations in the general vicinity of Sandlin's work, we will state that it lies somewhere in the artistic territory bounded by Robert Williams and Mark Ryden on the one side and Art Spiegelman, Mark Alan Stamaty and Ben Katchor on the other (with a dash of the anarchy of Marc Bell thrown in).  But, again, that comparison only should be considered as serving as guide posts pointing towards the work, and does not in anyway attempt to describe the actual crux of the work, which is deeply personal and rooted in Sandlin's personal history as someone born and raised in Northern Ireland, who was then transplanted in Alabama as a teenager.

Sandlin's work shines a bright, sharp light on dark and ill-defined areas of the American Psyche, and anyone who pays attention will come away with insights offered nowhere else.

Gone,  BUT – more on the way!  Please check back closer to the end of January.

This item belongs to the categories: Collections, Gift Catalogue
You may also enjoy these related titles: 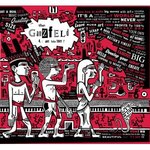