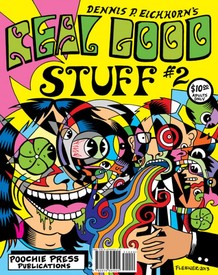 These two covers are of one book.  Printed in the 69 format, wherein you can start on either side, both of which meet in the middle whereupon you can flip the book and start again, for two reads in one.  Dennis Eichhorn made a name for himself in the independent comics world of the early '90s, with the series Real Stuff  (and, later, Real Smut).  Eichhorn's comics work follows the Harvey Pekar paradigm of a writer who corrals a wide-ranging group of artists with engaging material and assembles them into comics, and Real Stuff is his equivalent of Pekar's American Splendor, wherein he converts anecdotes and episodes from his life into comics fables for our times.  The similarity ends there, however, as Eichhorn, a Montana native and graduate of the University of Idaho, who has spent most of his adult his life in the Seattle area, has led an existence a world away from that of Pekar.  Sex and drugs along with a bit of rock 'n' roll but a lot of drinking are what define Eichhorn's extroverted comics tales, in great contrast to Pekar's introverted tales of angst, record collecting and work.  As per the Real Stuff norm, there are plenty of able artists on hand here, including, most notably, long-time Eichhorn-collaborator, Mary Fleener, who turns in a story as well as the cover to "#2".

Life of the Party The Complete Autobiographical Collection

Newave! The Underground Mini Comix of the 1980s