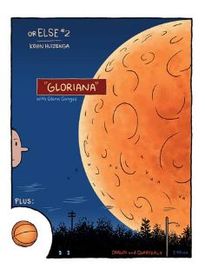 Or Else #2
Kevin Huizenga
published by Drawn and Quarterly

This issue is a (only slightly) revised edition of Huizenga's mini-comic masterpiece, Super Monster #14: Gloriana Comics, possibly the greatest mini-comic ever published.  If you missed it, now's your chance to rectify that particular situation and get your hands on one of the most important comic books of the twenty-first century.  Here's what we had to say about SM #14 when it originally appeared:  "At the center of Huizenga’s work there lies evocation.  Every piece of work he has produced works towards the evocation of a moment or  feeling or sensation or thought or idea or, in his best work, all of these together at the same time.  Huizenga’s dominant style is rooted in the clean-line school; something along the lines of Roy Crane via Hergé via Scott McCloud, and with what seems to be more than a passing familiarity with Jaime Hernandez’s work.  But he brings many diverse influences which he both layers over and integrates with this base.  Huizenga is also a highly-skilled observer and recorder of the world around him.  He incorporates pen and ink sketches of still-lifes, landscapes, and, although to a lesser extent, portraits.  In this he is one of the few people working in comics to pick up on what Frankie Sirk and Sirk Productions have been laying down in their publications of the last five years.  In addition, he is capable of using the computer here and there to achieve and/or enhance specific effects.  He also isn’t afraid to take chances, as he demonstrates in employing the formal techniques of traditional Chinese painting to evoke the lost patrimony of a Chinese baby put up for adoption in SM #9 (now reprinted in Or Else #1, retail price - $3.50  copacetic price - $3.00).  Super Monster #14, more properly titled Gloriana Comics, marks a breakthrough for Huizenga.  All the various methods and modes that he has been engaged with through the previous issues finally gel and really come together here.  Any doubts you might have as to whether self-published "mini" comics could ever reach their full potential will be eliminated once and for all once you've read this.  Let's hope that he manages to hold onto the creative advances achieved in the making of this work and continue on from here."

This item belongs to the categories: Small Press Comics, Copacetic Select
This item is part of the series: Or Else
You may also enjoy these related titles: