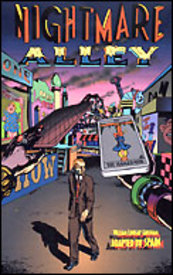 This book ranks as one of the greatest comics adaptations of a pre-existent work of 20th century American fiction ever produced.  This might very well be Spain’s masterpiece.  His visualizations totally nail the the novel’s milieu, and his characterizations of the protagonist and his wide and varied supporting cast are spot on -- they just couldn’t be better.  This is an insightful illustration of Freud’s dictum that the unconscious is really in the driver’s seat.  It gives the reader a glimpse at what goes down on some of the intersections usually hidden in the many dark corners of society, and in so doing reveals the ineradicable stain made by corruption upon childhood innocence and how it plays itself out, at least this time...  This is a work that is sure to be enjoyed by any fan of Spain’s as well as anyone who apreciates the noir fiction of Jim Thompson, David Goodis, and Cornell Woolrich.  A bona fide 20th century fable.