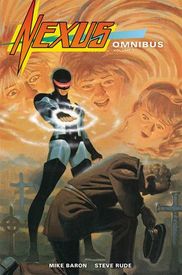 This 424 page full color softcover collects the entirety of 14 consecutive issues  – #12 - #25 – of the one and only Nexus, arguably the best classic science fiction heroic fantasy comic book series of the last thirty years.  These are the issues where the Nexus backstory is built up and up-to-then-secret origin is revealed.  Also introduced in these pages are General Loomis and his daughters, who came to be known as the Loomis sisters and went on to play a large part in the long running Nexus saga, which continues to this day.  With one or two exceptions,  all the Nexus stories are pencilled by Rude, who is relaly on a roll here.  Also included are the numerous "Tales of Clonezone" back-up short stories scripted by Baron, most of which have art by Mark Nelson.  Anyone who enjoys heroic fantasy, should give Nexus a try, and these value priced omnibus editions are the best way to do so.

This item belongs to the categories: Classic Comics Collections, Collections
You may also enjoy these related titles: