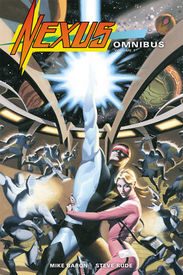 One of the very few notable achievements made during the 1980 & 90s in heroic fantasy comics, in Nexus Baron & Rude created a wholly original concept and proceeded to put together one of the most elaborate and fully fleshed out comics universes, one that is both fully engaging on its own terms, but that also allegorically corresponds to the history of the twentieth century in many instances – particularly where totalitarianism is concerned.  This 424 page edition collects the rare three issue original black & white run published by the short-lived Capital Comics Imprint, and then the first eleven issues of the full color series, the first six issues of which were published by Capital Comics, before handing the series off to the (then) newly formed First Comics, who published the remainder of the original 80 issue run, after which point Dark Horse Comics took over.  If you've ever been curious about this series, now is the time to check it out.  Volume 2 is already on the schedule for April 2013, so there's plenty of SF flavored heroic fantasy on its way; and Rude's steadily improves along the way, as Nexus slowly but surely develops into a one of a kind epic.