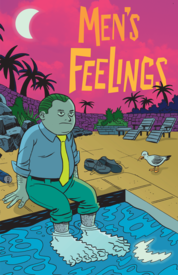 OK all you comics readers out of touch with your own feelings (you know who you are!), those of the male prersuasion -- the majority, no doubt -- are now offered respite, in the form the second jam-packed issue of Men's Feelings!  Ted May has done the heavy lifting for you, pulling back the psychic boulders one by one to reveal the quivering mass of male insecurites that lie within.  In these eleven tales, ranging in length from the single pagers, "Thank You," and "Good Night," to the epic, ironically titled 10-pager, "You Can Skip This One," Mr. May demonstrates his mastery of comics story-telling in the service of a higher calling -- that of puting men in touch with their feelings.  All for a fin!