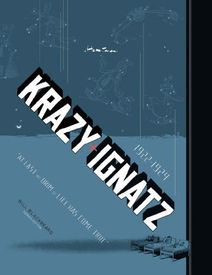 Krazy + Ignatz, 1922 - 1924: "At Last My Drim of Life Has Come True"
George Herriman
published by Fantagraphics

In a bit of fitting Fantagraphical synchronicity, this, the final volume of their series collecting the complete run of Krazy Kat Sunday pages in a single uniform edition, was published in tandem with their initial volume of Nancy dailies.  While in most repsects the respective creations of Herriman and Bushmiller could not be more different, on the level of achievement they certainly have much in common, and taken together their work provides ample demonstration of the breadth and depth of the comics form.  "At Last My Drim of Life Has Come True" is an apt title in more ways than one.  First and foremost as it applies to series editor, Bill Blackbeard, in that it completes what may have been his own dearest "drim", to shepherd the complete run of this great work into a lasting posterity.  Blackbeard died shortly before this item saw print, but not before he penned yet another joyfully enthusiastic introduction.  Let us all give thanks to his life spent in the service of preserving and promoting the great legacy of the first half century of American comics and look to his example in going forward.   This volume, weighing in at over 250 pages, is by far the heftiest in the series, and provides a wealth of bonus materials.  Its highlight is the inclusion of the ten experimental color Sundays that ran in 1922, over a decade before the series switched over to color on a regular basis.  These pieces are ¡el primo! Herriman and cannot be oversold.  Also, just in the nick of time ("Better Late Than Never" declares the essay introducing them) this volume includes Herriman's very first comic strip, Mrs. Waitaminnut – The Woman Who Is Always Late, that originally ran way back in 1903!  And, as if that weren't already enough, we are presented with the parting gift of the complete run of Herriman's Sunday-only series focusing on domestic life, Us Husbands that ran for fifty weeks in both full-color and duo-tone in 1926, and for which Jeet Heer provides an introduction to bring you up to speed.  We all knew this series would have to end eventually, but at least it went out with a bang! (Now, if only we can persuade Gary and Kim to collect the dailies...)

This item belongs to the categories: Gift Catalogue, Classic Comics Collections, Copacetic Select, Collections
This item is part of the series: Krazy & Ignatz
You may also enjoy these related titles: 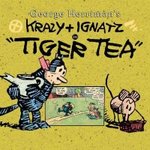