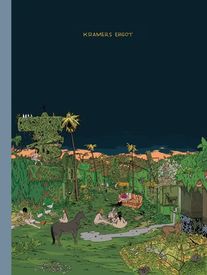 Kramers Ergot #7 (OP Rarity)
Dan Zettwoch, Frank Santoro, Chris Ware, Kevin Huizenga, Mat Brinkman, Kim Deitch, John Hankiewicz, Jonathan Bennett, Sammy Harkham, Daniel Clowes, Rick Altergott, Gabrielle Bell
published by Buenaventura Press
We just got in ONE copy that was originally purchased here in Pittsburgh during the initial Kramers Ergot 7 Tour, and includes the exclusive, tour-only print (#162/200) by Sammy Harkham.  Excellent condition.   It's here!  All we can say right now is, "WOW!"  Sammy Harkham, Alvin Buenaventura and their cohorts have raised the bar once again with what must be considered as one of the most singular books in the history of comics.  With a contributor list that reads like a Who's Who of contemporary comics (see below), this volume of Kramers rolls back the hands of time by producing a book that reproduces that magnificent size of the original Sunday comics of 100 years ago that we have been reacquainted with through the efforts of Sunday Press and their mind-boggling Little Nemo collections.  Team Kramers has connected the dots and realized:  "If they did it then, there's no reason we can't do it now!"  This volume presents all new work produced specifically to be reproduced in the full-up, full-color, big-daddy, 16" x 21" format that will recapture the   wonderful amazement of the glory days at the dawning of the era of comics.  The equally amazing renaissance that comics is currently undergoing will likely come to be symbolized in some fashion by this very volume of Kramers Ergot.  You won't want to miss it, so you better start saving up now!

Kramers Ergot 7 is, without a doubt, one of the most spectacular works of comics ever published.  Measuring a staggering 16" x 21", and containing all new, never before seen work that was commissioned specifically for this giant-size format, it contains page after page of eye-popping work by  today's top comics creators, who have pulled out the stops for this rare chance to produce comics work on this massive scale.

This item belongs to the categories: Gift Catalogue, Copacetic Select, Anthologies, Copacetic Collectibles
This item is part of the series: Kramers Ergot
You may also enjoy these related titles: 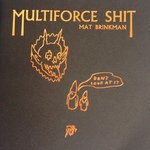 My Dog Ivy: A July Diary