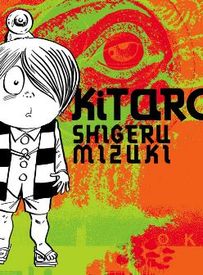 Fans of Mizuki's late work, recently published in North America, also by D & Q – i.e., Onward to Our Noble Deaths and NonNonBa – will be pleased to have this opportunity (at long last!) to get their hands on a meaty volume of English translations from the manga series that made Mizuki a household name in Japan.  Begun in 1959, Kitaro, along with his cast of cohorts, presented a long-running series of yokai tales to a receptive and responsive audience in Japan, where these tales of shape shifters have been an integral component of Japanese mythology for centuries.  The stories that make up this 400 page volume are all from the the late 1960s and are considered to be among the best in the series.  Find out for yourself by checking out this online preview courtesy of CBR.  We are thankful that D & Q has provided an introduction, page notes and a character glossary to help readers coming fresh to the series to get situated.

This item belongs to the categories: Classic Comics Collections, International
You may also enjoy these related titles:

Onwards Towards Our Noble Deaths