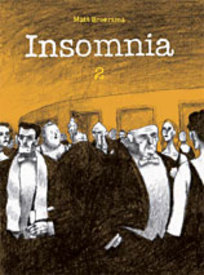 Here they are, the next three installments of that swellegant line of superior quality pamphlet comics, the "Ignatz", that is a co-production of Fantagraphics Books and Italy's Coconino Press.  The main attraction is Babel 2 which is the second installment (the first was Babel 1, published in 2004 by Drawn & Quarterly in what was the prototype for the Ignatz line) in the continuation of the epic tale begun in Epileptic.  Babel is a graphic tour de force that no comics connoisseurs will want to miss.  In the second installment of Insomnia, Broersma lightens his palette and turns in what is, in our estimation, the strongest work of his career.  Gipi continues the sombre, rain-washed tales of Italian outcasts in They Found the Car that he offered up in the first installment of "Wish You Were Here", The Innocents.  All three of these are recommended, as are all of the previous installments Ignatz line.  Do yourself a favor and check these out.